There has been lots of talk about M&S rebranding so will this spark a turnaround for the store. They brought in new designer Belinda Earle who has worked at Jaeger and Debenhams and the new campaign certainly seems to have made an impact. With a plan to focus on fashion rather the just clothing means the company hopes to have more of a presence at fashion weeks. Helping them with this is 12 of ‘Britain’s Leading Ladies’ chosen due to their diverse backgrounds and roles in society featuring Dame Helen Mirren, Katie Piper, Ellie Goulding and Tracey Emin. These twelve women vary in age and the campaign sees them modelling some of the new Autumn/Winter collection in various locations, including a on a boat by Tower Bridge. With US Vogue’s creative director Grace Coddington on side surely they will succeed. 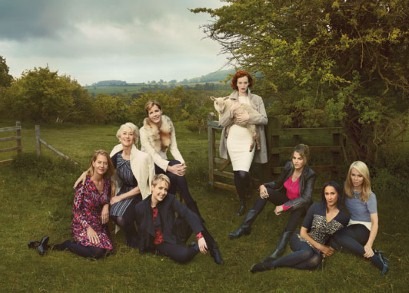 Katie Piper – She rebuilt her life following an acid attack in 2008. She is a model and a successful TV presenter and has also set up a foundation to support people with burns and other disfigurements.

Ellie Goulding – She is a singer-songwriter and skilled skilled instrumentalist who has already released two albums, won a BRIT award and performed at the wedding of the Duke and Duchess of Cambridge.

Helen Allen – A staff nurse and mother of two, she founded the charity PEPAIDS (Peer Education Programme Against AIDS) and was named nurse of the Year in 2011.

Nicola Adams – She was the first female boxer to win an Olympic gold medal a London’s 2012 games, she had to battle with injury and with determination has got to where she is.

Monica Ali – Bangladeshi-born, British-raised the writer’s debut novel, Brick Lane was shortlisted for the Man Booker Prize and adapted into film. She has since published two further novels.

Darcey Bussell – She is a former Royal Ballet principal ballerina who retired in 2007 to a eight-minute standing ovation. The CBE writes children’s books and is a popular television personality.

Laura Mvula – A Brit Award nominated singer-songwriter, also a director of the Lichfield Community Gospel Chior was just over a year ago working as a receptionist when she landed her first record deal.

Karen Elson – A model, musician and mother of two who has been in the public eye since she was discovered aged 15 and has worked with the world’s greatest photographers.

Jasmine Whitbread – CEO of Save the Children International and the former International Director at Oxfam, the mother of two is known for her leadership skills and working in teams in 120 countries.

Grace Coddington – A former British model and long-time creative directive for US Vogue, she remains a hugely influential and outspoken force in fashion. Late last year her memoir, Grace, was published.

Tracey Emin – She is an award-winning artist, CBE and Professor of Drawing at the Royal Academy and Art. She is best known as a leading figure in the Young British Artist (YBA) movement, her emotionally revealling work and her forthright views.

Bosses at M&S are hoping that with a new designer and the new campaign things will turn around for the company. They will not have long to find out with summer drawing to a close and the coats start to make their way into stores. So far reviews have been divided about the released campaign shots, with some excited for what M&S will have in stores next season, and others pointing out that the variety in the women used will make it hard for M&S to lock down a target market. Personally I think it is a good move for the brand enticing new customers into their stores along with their current customer base especially as it appears there is a more fashion forward look marking the start of a new era for them.